CD Review: The Aquanettas - Love With The Proper Stranger 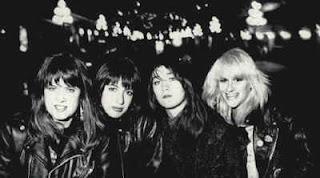 Back in 1990, the four-woman band, The Aquanettas, released a debut album filled with fun and catchy garage rock tunes spun from a woman’s perspective. It should have launched them into a successful career, but sadly, they broke up five years later. I can’t even find an official video by them on YouTube, even though I remember seeing one (possibly on JBTV) a number of years back. Lead vocalist -guitarist, Deborah Schwartz, released a solo CD titled The Wrongs Of Passage in 1998. Here’s an edited version of a review I wrote for the Illinois Entertainer back when Love With The Proper Stranger first came out.

Like The Go-Go’s and The Bangles before them, the four-woman New York based band, The Aquanettas, turn to the 1960s for inspiration on their 12-song debut, Love With The Proper Stranger. The hard-edged “Faults” would be a perfect segue from Eleventh Dream Day’s “Driving Song,” as both tracks examine the frustrations of trying to score on the night club scene. “Pictures Of Italy” is a silly but irresistible look at life on a budget that opens with the line, “Every day I eat pasta rigitoni for breakfast.” The bouncing rhythm of “Up” provides another highlight.

“Beach Party”  opens with a poetic description of the ocean shore at dusk before the first verse ends with the line, “With beer cans and papers all over the place.” It’s a rollicking song about partying on the beach, and two of the regulars who hang out there. “Larry and Pete are just typical guys/Blasting their music and watching the thighs.” The songs on Love With The Proper Stranger are pretty basic, but they prove there’s plenty of room for women in the garage.
Posted by Terry Flamm at 10:10 PM