Time For A Refill 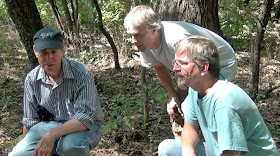 That’s me on the left in the Underground Garage cap. Willy Deal is center, and Jeff Kelley is on the right.

First a bit of business regarding the series of short videos called Pond Life that have been created to promote the upcoming season of Doctor Who. I mentioned these clips featuring the Amy and Rory Pond characters at home in last Friday’s Slumgullion but wasn’t sure where people could find them. Not too surprisingly I discovered they can be viewed on Nerdist, which is always a cool site for sci-fi fans to visit.

I spent a few hours last Saturday morning in a nearby forest preserve filming comedy bits that will be shown on Sunday Morning Coffee With Jeff. The weekly Internet show has been on hiatus for a few months, but will return at the beginning of September. Host Jeff Kelley came up with an idea about me, him and Willy Deal stumbling into one mishap after another while lost in the woods. He had the basic scripts, but we improvised some things, and Willy and I each came up with a short skit on out own. It was a lot of fun, and I’m eager to see how they turned out. Our misadventures will appear on Sunday Morning Coffee With Jeff over a number a weeks.

In the meantime, I trying to come up with a new concept of my own for Jeff’s show. Over the past few years, I’ve done 21 episodes of Manchester Gallery, in which I portrayed the curator of a pop culture museum; played an inept roving reporter who always seemed to annoy Jeff; covered the arts on What’s With Terry?;  created a spoof of Breakfast With The Beatles called Hanging With The Hollies; and portrayed a cranky senior citizen on Old Days. Hopefully, the sketch comedy muse will visit me soon.

I’m also really interested in doing some short interviews with bands and musicians that would maybe include a live performance. The challenge would be finding the right time and place to do them. Jeff is always opened to new ideas for his show, so if you have something in mind, feel free to contact him at coffeewithjeff.gmail.com
Terry Flamm at 10:04 PM