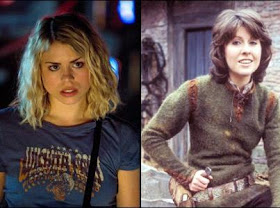 Sarah Jane Smith and Rose Tyler are among the many women who have traveled with The Doctor.
Photo from the Doctor Who Facebook page.

Just got home after having some fun at the Wizard World Comic Con. The convention, which features celebrity guests, billions of comic books, and other sci-fi/fantasy related merchandise, continues through Sunday at the Donald E. Stephens Convention Center in Rosemont.

Fest For Beatles Fans - Chicago kicked off today and will run through Sunday at the Hyatt Regency O’Hare in Rosemont. Guitarist Laurence Juber, a one-time member of Wings, was recently added to the guest list. Fest For Beatles Fans - Chicago is going on right next door to Wizard World Comic Con, in case you want to check out both events in one day.

The Women Of Doctor Who, a special program honoring the female companions who have accompanied The Doctor throughout the British sci-fi series, will air on BBC America this Saturday at 8:00 Central time.

Cubs fans can spend a fun afternoon supporting their team this Sunday, August 12th, and help a worthy cause. Cal’s Angels, a charitable organization that helps kids fight cancer, is sponsoring an event at Ivy Rooftop (1010 W. Waveland Avenue) while the Cubs play the Cincinnati Reds in Wrigley Field. The $100 ticket price includes food, an open bar and chances to win a jersey autographed by Ernie Banks or four tickets to an upcoming Cubs game.

Cal’s Angels is a favorite charity of Miles Austrevich, the amazing 19year-old of Jokes4Miles fame. His father Len has been trying to collect 5,000 videotaped jokes to help cheer up Miles while he’s undergoing his latest round of treatment. For updates on Miles’s inspiring story, check out the Jokes4Miles page on Facebook.

The three remaining members of The Monkees have announced they’ll be embarking on a limited engagement tour, including a date at the Chicago Theatre on November 16th.

Now that Dot Dot Dot  has conquered the Chicago street festival scene, they’ll be returning to their humble origins for a free show in Palatine at Durty Nellie’s on August 25th.

Power pop trio The Pop Dollys will be performing at Red Line Tap tomorrow night. The Pounders, Mike Benign, and Gecko Club are also on the bill. I recently reviewed Martha, the highly impressive new release from The Mike Benign Compulsion CD, for the Illinois Entertainer. Hopefully it will run in the September issue.

The Wrong Boys, a band comprised of veterans of Chicago rock scene have a gig tomorrow night at Mister Mo’s Sports Bar in Palos Heights.

Northhalsted Market Days  runs this weekend, with headliners Olivia Newton-John, Sheena Easton, and The Pointer Sisters, Several local bands will be performing as well, including The Wanton Looks, The Handcuffs, Dot Dot Dot, and Lez Zeppelin at the Belmont Stage on Saturday.
Terry Flamm at 11:40 PM