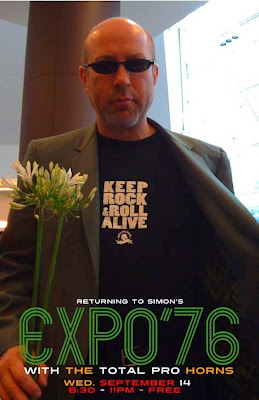 I’m encouraged by the idea of men with this hairstyle being thought of as sex symbols. Photo from Expo 76 Facebook page.

Art For Art Sake. The Music Room at 26 N. Brockway Street in Palatine will be hosting a meet-and-greet from 6:00 PM to 9:00PM tonight, as a kickoff to this weekend’s Art Affair Around The Square art festival. Each of the artists involved has been invited to bring a painting to discuss.

76 And Some Trombones. Expo 76, the eclectic covers band that features Dag Juhlin of The Slugs and Kenn Goodman of The Service, will return to its home turf at Simon’s Tavern on Chicago’s north side, Wednesday, September 14th. They’ll be backed by The Total Pro Horns. Admission is free.

Action! I’ve been having fun on Facebook chatting with friends about being an extra in the movie, Contagion, which opened today in theaters. I worked on two scenes; one in an armory on Chicago’s south side, and one in an open lot in Evanston. I doubt I’ll be recognizable, since I was wearing a Hazmat suit in the armory, and a winter coat with a hood in the outdoor scene. I was in a fair amount of bits that were filmed so it’ll be interesting to see which ones made it into the film. I got kicked out of one bit where I was walking behind the action because one of the crew said my Hazmat suit was making a loud swishing sound.

An Odd Experience. Musician/journalist Hugh Hart sounds like he’s traveling back to his cutting edge days of leading the Chicago band The ODD on a new rock video titled “Come Out Swinging.” Hart’s take on the current wave of worldwide political upheaval is set to a high-speed arrangement featuring guitarist J.D. Dragus, and features black and white footage of vintage political unrest and female wrestling.

Be The First Kid On Your Block To Have One. The Second Disc online newsletter notes that there have been a number of tributes lately to Freddie Mercury, who would have turned 65 this year. There’s a link to a fun animated Google video honoring the charismatic vocalist, but mainly, The Second Disc talks about some upcoming Queen box sets. The most elaborate will be the 25th Anniversary reissue of Live At Wembly Stadium, which includes CDs, DVDs, and among other unique items, a 12” inflatable Freddie Mercury doll.

British Rock On The Telly. The Fest For Beatles Fans reports that Albert Maysles’s Paul McCartney documentary The Love We Make will air on Showtime tomorrow night at 9:00PM. Not sure if that’s Eastern, Central, or Pacific Standard time.

The Zombies will be performing on Late Night With Jimmy Fallon this coming Monday, September 12th.

All You Need Is Cash. Visitors to The Fest For Beatles Fans who have admired Eric Cash’s striking portraits of the band will be glad to hear he now has a newsletter. The September 6th edition notes that the artist’s work is featured in three newly released books, including Bruce Spizer’s Beatles For Sale On Parlaphone. The newsletter offers six examples of Cash’s work, plus a new piece depicting George and Paul sharing a microphone in the studio. Readers can enter a contest to name the new work, with the winner getting a free copy.

Maybe It Disappeared Into The Sea Of Holes. The Members of The British Beatles Fan Club Facebook page is reporting that a large wooden Yellow Submarine model was stolen from outside the St. Barnabas Church in Liverpool. This was the same church where Paul McCartney once sang as an choir boy.

Seems Like Only Yesterday I Was Watching His Cool Animated Video On MTV. Matthew Sweet will be playing selections from his latest effort, Modern Art (due out on September 27th) on an upcoming tour that includes a pair of Chicago gigs at the Bottom Lounge on October 13th and 14th. He’ll also be celebrating the 20th Anniversary of the release of Girlfriend by playing the 1991 CD in its entirety.

Three Dimensional Art For The Fridge. The Rock And Roll Hall Of Fame comes up with some pretty cool items for its online gift store, and the new Long Live Rock Blue 3-D Magnet a good example. Set this little round baby on the fridge and you’ll be looking at a three dimensional image of a guitar floating above a wall of flames and the Long Live Rock slogan. The cost is $5.99.