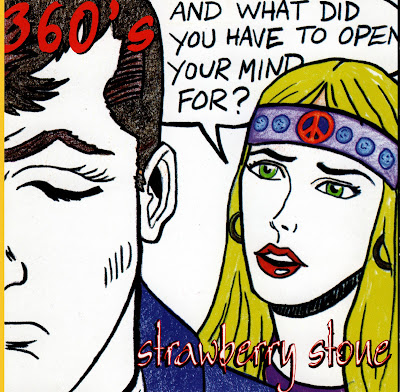 Note: This review originally appeared in the Illinois Entertainer in 1994.

Boston’s 360’s may have dabbled in psychedelic music on their previous two albums, but they embark on a full scale head trip with Strawberry Stone. Singer Audrey Clark and lead guitarist Eric Russell lead the way through a series of high energy, melodic nuggets like “When I’m High,” “Dig USA,” and “Strangest Day (Mind Explosion)” before closing with the ethereal ballad “Wind Is Green.”

Most of Strawberry Stone works because the 360’s have an obvious affection for the genre. The only problem comes on the self-indulgent free-form “Nitetime Angel Candy,” which drags on for 10 minutes. Fortunately, “Dragged” follows directly after, blowing away the clutter with a short blast of guitar and snarling vocals. The 360’s also impress with “Riverwitch,” a spooky track that feature’s Clark’s electronically altered vocals.