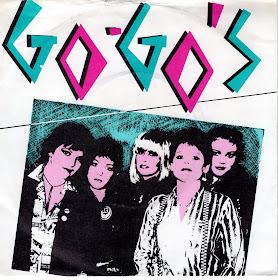 The Go-Go’s performed “We Got The Beat” on the Dancing With The Stars season finale last night. The cameras spent more time on some dancers than the Go-Go’s themselves, but it looked like Belinda and Co. were having fun. The Go-Go’s recently released a 30th Anniversary edition of their first effort, Beauty And The Beat, which contains a bonus disc of live performances. They’ll kick off their tour with a gig in Las Vegas in just a few days.

This 45 was released on the Stiff label in the UK a year before I.R.S. put out Beauty And The Beat, and sports a colorful cover that taps into the band’s early punk roots. I had no idea who The Go-Go’s were when I bought it, so the magic of cutting edge marketing must have worked on me. Although “We Got The Beat” would propel The Go-Go’s into the mainstream, it’s fun to consider that it came out in the same year as Joy Division’s “Love Will Tear Us Apart” and has a similar guitar-driven intro. It was composed by guitarist Charlotte Caffey, who has always seemed like the quiet member of the group.

“We Got The Beat” was an anthem for kids who were tired of the same old music. The reference to getting out of school evokes images of summer, but Caffey might have also meant it as a metaphor for freedom. At any rate, it’s an energetic call to action with fun harmonies and an irresistible melody.

It’s always a bonus when the B-Side of a single is a good song as well, and that was the case with “How Much More.” Penned by Caffey and her fellow guitarist Jane Wiedlin, it benefits from their frenetic strumming, Belinda Carlisle's evocative vocals, and Gina Schock’s galloping beat. It’s the tale of a female stalker who follows a guy around every night, and feels she’s about to lose her mind when she spots him with another girl. Interestingly, she doesn’t hate her competition. She simply notes, “She’s looking good just like I would/If it could be me.” Fate is the real villain in this song, which combines a modern arrangement with the 1960s girl group sound.