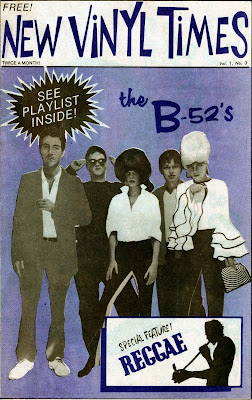 I discovered Tower Records back in 1980 when I dropped by their store on Sunset Boulevard in West Hollywood after auditioning for a guest role as a redneck trucker on The Dukes Of Hazzard. Actually, I visiting an older brother who had moved to California. I was amazed by Tower’s selection of Hollies’ import albums, and bought a copy of Butterfly. As an avid collector of pop culture publications, I was thrilled to find a wide selection of free papers, including the L.A. Reader and L.A. Weekly.

I also grabbed a copy of New Vinyl Times, which according to a diagram on the back cover, was a “Free Record Review Magazine combined with a Special Jukebox (at your record store).” The idea was to use the magazine’s reviews to learn about various artists. The writing was purely hype; I’ve glanced through the various album profiles, which were listed alphabetically from Joan Armatrading’s How Cruel to Warren Zevon’s Bad Luck Streak In Dancing School, and none of them warn against wasting your money on a particular slab of vinyl.

Among the albums listed were Fleetwood Mac’s Tusk, Heart’s Bebe Le Strange, Led Zeppelin’s In Through The Out Door, The Buzzcocks’ A Different Kind Of Tension, The Clash’s London Calling, Squeeze’s Argybargy, Pink Floyd's The Wall, and debut releases from The Undertones, The Romantics, and Madness. There were uncredited feature stories on reggae music and The B-52’s and a cool center spread showing over 70 band photos or logos. The inside front cover was a full page ad for The Specials and The Selector, and the inside back cover was a full page ad for Gil Scott Heron. So basically, New Vinyl Times was a 12-page promo packet, but it looked cool, which is why I still have it in my collection.

Some years later, I would have a Tower Records in my own back yard, when I lived in Lincoln Park, just around the corner from their location on Clark Street. I went there at least twice a week to browse through CDs, magazines, and action figures. I saw Material Issue, Ivy, Lime Credo, and Sam Phillips perform live there, as well as several other acts. Even though I’ve long since moved to the suburbs, I was heartbroken to see that Tower Records close down.