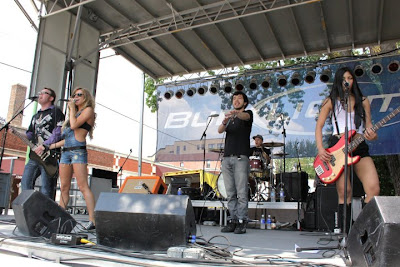 Photo taken from My Villain Your Hero Facebook page.

As summer approaches, my hometown of Palatine, like Chicago and the other surrounding suburbs, offers a full schedule of outdoor concerts. Out this way, bands perform every Wednesday and Friday night, weather permitting, at the Fred P. Hall Amphitheater. The selection process for these concerts has been on autopilot for years; with the same acts, or types of acts always getting the nod. Still, they make for an enjoyable night of music.

American English plays this Friday night, June 18th, carrying on the tradition of kicking things off with a Beatles tribute band. In the past, we’ve also had Liverpool Legends and British Export. A few years back, the outdoor concert series broke tradition by opening with local heroes Dot Dot Dot, who went over extremely well. In addition to Dot Dot Dot, some other bands I’d like to see return to the Palatine stage are The Neverly Brothers and The New Invaders. Plus, it would be great to have an additional night each week, when more cutting-edge bands could play.

Palatine Concert Band always gets three slots over the season, possibly because no musical act in history has had more bad luck in getting rained out. They’re not rock and roll, but they’re very talented, and my wife and I enjoy their tributes to Broadway shows and famous composers. Otherwise, the most interesting concerts this season are Big Guitars From Memphis on June 25th, and oldies cover band The Meteors on July 23rd.

Sometimes, my wife and I buy a pizza at the nearby J.J. Twigs and bring it to the concert along with some refreshing beverages, but there are also concession stands near the amphitheater.

The Palatine Jaycees will sponsor Hometown Fest 2010 from Thursday, July 1st through Monday, July 5th. There will be several food vendors, fireworks, and a full schedule of bands.

My Villain Your Hero, a young group that plays a mix of hip-hop originals and cover versions will perform from 2:00 to 3:30PM on Sunday, July 4th. Although I lean more toward power pop, I caught one of the band’s regular gigs at Durty Nellies, and was impressed with its non-stop energy, as well as the one-two vocal punch of Mig Mora and Jennifer Lee. My Villain Your Hero has become much more popular since I first mentioned them in a post under my Elevated Observations column quite a while ago, and it certainly doesn’t hurt that Lee looks like a 20-something version of Jennifer Aniston.

Saving the best for last, The Smithereens will headline this year’s Palatine Downtown Street Fest on August 28th. I caught Pat DiNizio and the boys at an outdoor performance right next door to Wrigley Field last summer, and they are still an amazing act to see in a live setting. In addition to playing their own power pop masterpieces like “House We Used To Live In,” “Behind The Wall Of Sleep,” and “Blood and Roses,” The Smithereens expertly cover The Beatles and The Who.

Ralph’s World is returning for another gig at the Street Fest. As I said in my “Pure Pop For Knee High People” post last August (see archive), I’m a long-time fan of The Bad Examples, but I had never seen lead vocalist Ralph Covert performing as Ralph’s World. Covert applies the same elements of irresistible melodies and clever lyrics that make the Examples so much fun to his kid-friendly shows. Hi Infidelity and Sixteen Candles are also booked for the Palatine Downtown Street Fest, and I’m sure other acts will be added along the way.

Index: American English, My Villain Your Hero, The Smithereens