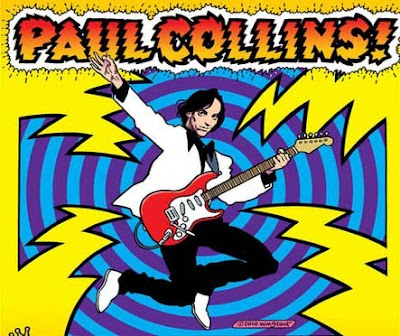 Musician Paul Collins has been recruiting power pop fans for The Beat Army, and recently posted on Facebook that he’s now selling I DON’T FIT IN t shirts. The slogan on the bright red and white shirt comes from a song by the same name on the impressive 1979 self-titled debut from The Paul Collins Beat.

I didn’t discover Collins until a few years after that. Back then, I still lived on Chicago’s southwest side, and hung out at Haywires, an unusually adventurous bar for that area. It often booked new wave and punk bands like Bohemia, The Clocks, and Gary Jones, and held jam nights organized by Bud Monaco. One of the most popular acts was a young local band called Take Me that seemed to have an awful lot of good original songs. As it turned out, they were covering new acts like 20/20 and The Paul Collins Beat that we hadn’t heard before. A bit sneaky, but ultimately, Take Me did these groups a favor by making us want to buy their albums.

The I DON’T FIT IN shirts can be purchased in person when Paul Collins performs along with Mondo Topless, Stupidity, and former Friggs member Palmyra Delran at Asbury Lanes in New Jersey on June 17th. You might also be able to buy one when he plays gigs at Proud Larry’s in Oxford, MS on July 16th, along with The Neckbones; and at Hi-Tone in Memphis, TN with The Neckbones and Peter Case of The Nerves and The Plimsouls. The Beat Army had a rep hanging out at International Pop Overthrow in Chicago this past April, so hopefully that means Collins might be coming our way.

The shirts can also be ordered at paulcollinsband@gmail.com but according to The Beat Army, supplies are limited.