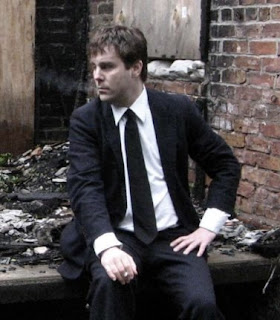 Note: These reviews originally appeared in the Around Hear column of the Illinois Entertainer.

William Steffey’s latest release, the six-song Love And Armageddon, exudes the sophistication of an artist who has been creating music for two decades. The well-crafted pop of “This Show Must Go On” and “Had To Pay” brings to mind Chris Stamey and Crowded House, and Steffey taps into 1980s synth bands for the lush “Cartography By Candlelight.” Melissa Reasoner impresses with her back-up vocals on a funky cover of Thomas Dolby’s “Weightless.”

Toby & The Tremors continue to honor the tradition of Bruce Springsteen on their latest CD, Blond Alibi by spinning tales of everyday people through mainstream rock. The energetic title track depicts a guy searching for a woman from a one-night stand who can clear him of a crime, while “Hidin’ Their Tears” is a touching look at how a divorce effects a couple’s kids. The disc ends with two rollicking party songs, “Memphis Rescue” and “Shake That Stuff.”

The title of Trizonna McClendon’s second CD, NewFamiliar is an apt way to describe her fresh approach to old school R&B. It’s a romantic mix of McClendon originals and her interpretations of other songwriters that showcases her smooth and seductive vocal style. The funkier “Love Electric” aims more for the dance floor than the bedroom, and McClendon proves she can handle the more serious theme of self respect on “A Song For Teena (What About You?)”

3 In Counting creates an interesting Country & Western/jazz hybrid on its 3 In Counting Live CD. Eric Csukor’s fluid piano playing is consisting impressive on easy-going tunes of self-discovery like “At The Edge” and “Handshake.” A pair of bonus tracks show 3 In Country expanding into a more bluesy territory.