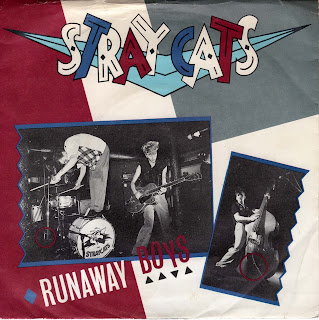 I can’t claim that I’m always ahead of the trends, but I did catch on to The Go-Go’s and The Stray Cats long before they achieved mass popularity. My memory is a bit clouded looking back to 1980, but I’m pretty sure I bought this import single of “Runaway Boys” after hearing it being played in Wax Trax! on Lincoln Avenue. Ah, the fond memories I have of that record store.

“Runaway Boys,” along with “Rumble In Brighton,” would provide a cutting edge alternative to the more playful tunes on The Stray Cats’ 1982 U.S. debut LP, Built For Speed. With Lee Rocker’s galloping bass playing and lines like, “Mom and Dad curse the day you were born,” it was rebellious enough to appeal to the punks. As the title suggests, it’s about kids running away from home and trying to get their kicks on a limited budget. An instrumental passage finds singer-guitarist Brian Setzer cutting loose on his instrument. In addition to capturing the sting of youthful alienation, “Runaway Boys” had a raw feel that made it sound like a live performance.

The B-Side was a cover of “My One Desire,” written by prolific rock-a-billy songwriter Dorsey Burnette, and covered earlier by Ricky Nelson. It’s a mid-tempo summer romance fantasy, and Setzer does a fine job crooning lines like, “Put your lips to mine with your kiss of fire.”

Back in the early 1980s, I worked in a small Mom & Pop record store that was considerably less hip than Wax Trax! Records. We had a display of Billboard’s Top 20 Albums, and if we were sold out of a particular record, we simply put a different album in its place. Being on Chicago’s southwest side, we had a lot of heavy metal customers. One in particular was upset to see Built For Speed in the top seller slot, and moaned, “Don’t tell me those kitty cat guys are number one!”

“No, that’s just there because we sold out of the real number one,” I assured him, but couldn’t resist adding, “The Go-Go’s have the best selling album.”