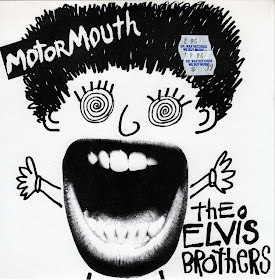 I mentioned a few times recently that it’s a mistake for a rock band to end a CD with a slow song. Maybe I’m thinking along the lines of a lines of a live performance, where musicians usually aim to leave a lasting impression on the audience via a big finish. The exception to the CD rule would be a short song that ends the disc on a quirky note, or acts as a reprise of an earlier track.

One of the best examples of ending with a bang can be found on Now Dig This, the reunion CD released by The Elvis Brothers back in 1992 on the Recession label. “Motormouth,” penned by drummer Brad Elvis, opens with what sounds like a snippet from a vintage screwball comedy as some guy repeatedly shouts, “You shut your mouth!” From there, Rob Elvis’s guitar breaks loose, quickly followed by a driving beat provided by Brad Elvis and bassist Graham Elvis. The song has a familiar, classic rock ‘n’ roll feel, and it’s filled with clever observations about a woman who just won’t stop yakking, like “Stop that girl before she drives us all insane” and “Well, I can’t imagine her on a little caffeine.” And keep in mind this was before the proliferation of cell phones.

The 45 RPM version of “Motormouth” came out on green vinyl, and had a card inside the jacket that described it as the vinyl/video mix (a performance video can be seen on YouTube). The startling sleeve art was created by Brad Elvis. The fun continues on the B-side, with the previously unreleased “Rock For It,” which was written by Rob Elvis. It’s a seductive number with a slinky arrangement, and like “Motormouth,” it has the feel of a live performance.