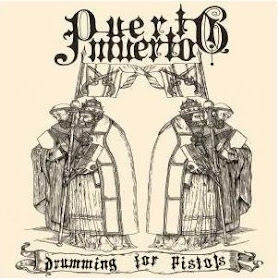 Note: This review originally appeared in the Illinois Entertainer. Unfortunately, Christa Meyer and Tim Kelley of Puerto Muerto have since announced that they have broken up. I wish them both luck in their future musical endeavors.

You expect a bit of drama from a duo whose Spanish name loosely translates into a port or passage for the dead. Vocalist-percussionist Christa Meyer and vocalist-guitarist Tim Kelley of Chicago’s highly touted Puerto Muerto are theatrical, and at times operatic on their latest release, Drumming For Pistols. They’re also just as likely to tap into old time gospel, or perform emotionally raw indie rock reminiscent of another impressive twosome, The Kills.

Occasionally Puerto Muerto’s artsy approach borders on contrived, particularly the deliberately silly scat singing and military beat on “Arcadia.” The melody of “Beautiful Women with Shining Black Hair” sounds like it was nipped from a kids’ TV show theme, but Meyer and Kelley make this bewitching folk tale of “colorful misfits” enticing. When Kelley sings lead on tracks like the jagged “Tamar” and the spiritual “Seven Souls,” his expressive baritone calls to mind Johnny Cash’s work on his acclaimed American series of CDs. Meyer is consistently engaging, whether it’s on the delicate finale, “Goodbye to the End” or the primitive garage rock of “Tanze.”