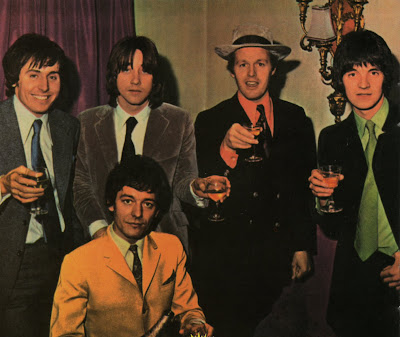 The induction of The Hollies into The Rock And Roll Hall Of Fame has caused some critics to question whether there was enough depth behind the band’s string of Top 40 hits to merit this honor. First of all, The Hollies placed more singles on the charts in England than any artist other than The Beatles, and notched a fair amount in America as well. Second, a number of outstanding tracks can be found on The Hollies’ albums.

I’ve been making mixed tapes (now CDs) since 1980, and have always preferred album tracks by The Hollies to their hits. Certainly, I would choose “Tell Me To My Face” or “Confessions Of A Mind” over “Jennifer Eccles” or “Sorry Suzanne.”

So, between now and March, when The Hollies will be inducted into The Rock And Roll Hall Of Fame, I’ll be spotlighting some of the better deep tracks they’ve recorded over the years.

“Put Yourself In My Place” - Like The Zombies, The Hollies recorded a rollicking version of Curtis Mayfield’s “You Must Believe Me” around 1965. It’s on their American release Hear! Here! and segues perfectly into an original Hollies composition. Written under the band’s collective pseudonym L. Ransford, “Put Yourself In My Place” sounds like it was deliberately created to complement both the sentiment and arrangement of Mayfield’s song. Both tunes deal with the way a lack of trust can bring chaos to a relationship, and both feature the band’s already legendary harmonies. Another highlight is an energetic instrumental passage built around the guitar, harmonica, and bass. It’s impressive that even at this early stage of their career, The Hollies were not only able to perform classic American R&B music, but also drew inspiration from it as songwriters.

“Tell Me To My Face” - By late 1966, The Hollies were up to their love beads in the creative revolution The Beatles and The Beach Boys had brought to pop music. Produced by Ron Richards, the Stop Stop Stop album featured full orchestra arrangements and innovative recording techniques. It would become the first in a trio of masterpieces by The Hollies. “Tell Me To My Face” is pure Graham Nash even if the song does kick off with drummer Bobby Elliott’s playful rim shots. Nash’s sophisticated lyrics flow effortlessly along the exotic melody as he confronts a friend or lover who's been bad-mouthing him to other acquaintances. “Tell Me To My Face” sports a Latin rhythm that evokes images of a couple dancing the tango. One of Nash’s best compositions, it was covered by the single-named Keith (of “98.6” fame) in the mid-1960s, as well as by Dan Fogleberg & Tim Weisberg on their Twin Sons Of Different Mothers album in 1978.

“Confessions Of A Mind” - One of the most ambitious efforts from the post Graham Nash era Hollies, this five-minute-plus epic on the 1970 Moving Finger LP was penned by guitarist Tony Hicks. A tale of a guy who ponders cheating on his girlfriend while she’s away, it’s also a showcase for Hicks’s underrated talent as he shifts from intricate Spanish guitar strumming to unbridled rock ‘n’ roll jamming. The harder-edged portions (as opposed to the classical passages) are a precursor of the grittier approach The Hollies would later take on “Long Cool Woman” and on most of the Distant Light album. Ron Richards, as usual, provides impeccable production values while lead vocalist Allan Clarke successfully navigates the song’s numerous tempo changes.

Don't forget Tony's awesome guitar on "Tell Me to My Face"! :)

The album wasn't called 'Moving Finger ; after much debate, the title was changed to 'Confessions of The Mind'.

In the U.S., the album was titled Moving Finger.