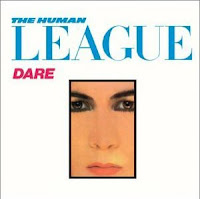 George Harrison once warned us to “Beware Of Darkness,” but in 1981, The Human League created a song in which a mere flick of a light switch resulted in a terrifying, mind-altering experience. Like everything else on the band’s ground breaking and platinum record, Dare, the melodic “Darkness” was driven by synthesizers, but they’re used here to establish a spooky ambience as well as to get people dancing. The lyrics describe darkness as a place “filled with sounds of fear” where the imagination runs wild. “I see shadows (don’t turn out the light)/Moving, changing shape.” Even the senses become a confusing mishmash. “I hear colours black and red/I see sounds that fill my head.” This was the only song on Dare that founding member/lead vocalist Philip Oakey didn’t have a hand in writing (other than the instrumental snippet, “Get Carter”) but his chilling delivery goes a long way toward conveying its emotional power. “And the clock stops as darkness closes in./I hesitate but it’s too late, I scream and scream again.”