A Book, An Album, And A Touching Tribute 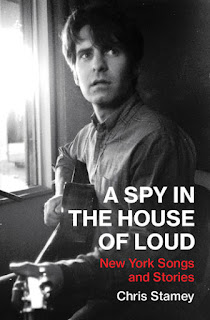 Chris Stamey, who’s been a driving force on the alternative rock scene for decades with The dB’s as well as a solo artist, just released an autobiography. A Spy In The House Of Loud - New York Songs and Stories is now available via the University Of Texas Press, and according to publisher’s website covers the origins of punk in the late 1970s. I would guess it also includes his remembrances of Alex Chilton, since the two musicians worked together on various projects. At any rate, it’s bound to a fascinating addition to your rock and roll library, and received a rave review on the Popdose website.

Universal Love, an album that was released in digital form last week, will be available on vinyl for this year’s Record Store Day. The concept behind Universal Love is to flip the pronouns in popular songs in order to send a message of inclusion and diversity. Bob Dylan, Kesha, St. Vincent, Benjamin Gibbard fron Death Cab For Cutie; Valerie June; and Kele Okereke from Bloc Party are the artists involved.

Reporter Maureen O’Donnell offered an informative and touching tribute to music marketer Mike Egan in a recent edition of the Chicago Tribune. For decades, Egan was a familiar face at local record stores, and helped visiting bands (such as U2 before they were huge) navigate the city. He was an avid supporter of new wave, house music, and Japanese anime.
Posted by Terry Flamm at 8:58 PM