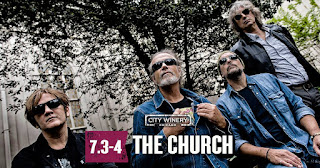 The Church will be City Winery Chicago tomorrow night and July 4. The Australian band formed in 1980 and is best known for its international hit “Under The Milky Way.”

The Arcada Theatre has added another power pop feather to its cap by bringing back The Smithereens on September 16. Pat DiNizio and the boys have previously played the St. Charles venue as part of a 1980s showcase with The Romantics, Marshall Crenshaw, and Tommy Tutone, and for a solo gig. As previously mentioned here on BHT, there’s a triple bill of Shoes, Pezband, and Dwight Twilley coming up at The Arcada on August 11.

Secret Colours, a young but nevertheless major power on Chicago’s psychedelic music scene, has a record release party for its new Dream Dream album coming up on July 15 at Martyrs’ on Lincoln Avenue. Yoko And The Oh No’s, a good band with a not so good name, and Soft Candy, a quartet that lists The Zombies and The Kinks among its influences, are also on the bill that night.

Thanks to John D. Kolonel of The Raine for tagging me in a Facebook post about wearing his Broken Hearted Toy button during the Material Reissue/Cliff Johnson and The Raine show at the Wire club in Berwyn. I had the pleasure of meeting Mr. Kolonel at the Cover Palooza show at The Gallery Cabaret a while and gave him a button. So here’s the deal: if I give you a BHT button and you post a picture of yourself on Facebook wearing it, I’ll give your post a “Like.” Cliff Johnson and The Raine’s next gig is on July 29 at Reggies Music Joint on State Street just south of downtown in Chicago. The Jay Goeppner Band is also on the bill that night.

The Yep Roc 20 Festival, an offshoot of the indie record label, will be held October 19 – 21 in Carrboro and Hillsborough, NC. The lineup so far comprises Nick Lowe; Dave and Phil Alvin with The Guilty Ones; Los Straitjackets; Tony Joe White; and the Stray Birds, with more to be announced. Tickets are already available on the official Yep Roc site and there are VIP packages available for $175.

Former WXRT and WLUP air personality Rob Skafish will be at the Chicagoland Record And CD Collectors Show in Hillside from 8:45 a.m. to noon on Sunday, July 16 to sell and sign copies of his book We Have Company: Four Decades Of Rock And Roll Encounters. Skafish, along with his fellow XRT DJ Terri Hemmert, were among the first Chicago radio people to embrace punk and new wave music when it emerged in the mid-1970s. In my yet-to-be-published rock novel, there’s a local radio DJ character who’s sort of a mix of Skafish, Hemmert, and Chrissie Hynde.

Speaking of Terri Hemmert, she focused on Ringo Starr’s birthday on her Breakfast With The Beatles show this morning on XRT. The Beatle drummer’s 77th birthday comes next Friday, and he’ll celebrate at the Capitol Records Building in Hollywood, CA from noon to 4:00 p.m. I’m still kicking myself for missing the birthday bash he had in Chicago a number of years back.

As reported in an Associated Press article in the Chicago Tribune, The Rock And Roll Hall Of Fame in Cleveland has a brand new exhibit called “The Power Of Rock.” It uses smoke, laser lights and hidden speakers to amp up film clips of induction ceremony performances from over 30 years. The article also mentioned that The Rock And Roll Hall Of Fame is undergoing a $15 million dollar remodeling. Hopefully, that means more Hollies memorabilia.

Random Name Generator: In honor of the Wilco song by that name, here’s a new BHT feature of shout-outs (and occasionally shout-ats) addressed toward the famous and not so famous around the globe. It could become a regular part of Slumgullion, a stand-alone post, or just pass into oblivion. Fasten your seatbelts, ‘cause here we go:

Chicago Tribune critic Kerry Reid’s review of City Lit Theater’s production of London Assurance was so well written and researched it makes me want to go see it. As much as I’ll miss Wendy Rice doing Saturday Morning Flashback on WXRT, I have no doubt that new rotating hosts (and longtime XRT air personalities) Johnny Mars and Frank E. Lee will do a great job. Lily Aldridge is the Victoria’s Secret model I think I could most easily be friends with. I’ve never seen the Talking Heads tribute band Big Suit but their ad on page 42 of the new Illinois Entertainer for an upcoming show at the Addison Rock ’N Wheels event on July 20 is so cool it makes me want to check them out. Father Michael Pfleger made a valid point when he told the Chicago Sun-Times that athletes from Chicago’s major teams should visit with city kids in low income neighborhoods the way Derrick Rose and Joakim Noah did when they played for The Bulls. My wife Pam and I go to the cafe at Mariano’s in Palatine every Saturday because we like the beverages and the friendly service from Hailey, Matt, Michelle, and Deb. To Mr. I-Fly-The-W-Flag-All-The-Time-No-Matter-How-The-Cubs-Are-Doing: if you don’t understand the rules, don’t play the game. Boris Boden, a guy I met back in the mid-1970s when we both hung out at the Harlow’s club on Chicago’s southwest side, does a great power pop show called Secret Weapon on Woody Radio. Critics have been praising Baby Driver as a well-made and clever action flick with a wall-to-wall soundtrack of classic rock, but I haven't heard if it actually uses the Simon And Garfunkel song by that name.
Posted by Terry Flamm at 4:09 PM