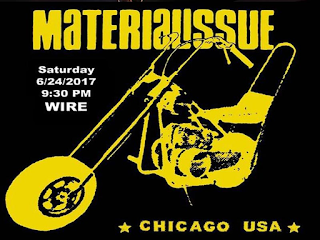 There’s a double bill of Material Reissue and Cliff Johnson backed by The Raine tomorrow night at the Wire club in Berwyn. Material Reissue, featuring original Material Issue members bassist-vocalist Ted Ansani and drummer Mike Zelenko, along with singer-guitarist Phil Angotti, have been performing the classic power pop songs created by the late (and original vocalist-guitarist) Jim Ellison on the Chicago club scene over the past few years. Cliff Johnson, of Pezband and Off Broadway fame has found a solid match in his current backing band The Raine.


Those of us who have enjoyed Wendy Rice’s wit and friendly delivery as host of WXRT’s Saturday Morning Flashback over the years will have one last chance tomorrow to hear her do the show. Rice, who started as an intern at the station in 1978, always fit in perfectly with the station’s patented air personality as friend format. With pre-recorded help from other members of the staff, like Lin Brehmer, Frank E. Lee, and news anchor Mary Dixon, Rice made Flashback fun, nostalgic, and informative. Each Saturday, the show focuses on a particular year with songs, news, and trivia. Rice will cover 1978 on her final broadcast before retiring. Unfortunately, I’ll be at a writing seminar all day tomorrow, so I’ll miss it.

Speaking of WXRT, congratulations to morning man Lin Brehmer on being voted as Chicago’s Best Radio DJ in the The Reader’s annual Best Of Chicago Issue. It’s always interesting to find out who nabbed top honors in the weekly free paper’s assorted categories. Other winners this year include Women And Children First as Best Bookstore; Alleycat Comics as Best Comics Shop; Salvage One as Best Place To Get Married (my nephew and his wife had their reception there); Revolution Brewing as Best BrewPub; CHIRP Radio as Best Local Music Blog; Riot Fest as Best Music Festival; and Steppenwolf Theatre as Best Established Theater Company.

That writing seminar I mentioned previously is The 2017 Writing Workshop of Chicago, being held from 9:30 a.m. to 5:00 p.m. at the Congress Plaza Hotel at 520 S. Michigan Avenue. Several literary agents will be on hand, and there will be a series of seminars with tips on how get published and how to develop stronger writing skills. I’ll be discussing my Work In Progess, a YA/Paranormal/Romance novel set in a rich San Diego suburb, in a 10-minute one-on-one with a literary agent. I also have three complete novels that I’m hoping to get published.

Chicago venue The Elbo Room is sponsoring the ninth annual I Am Fest – International Art and Music Festival on August 19. The day-long event will actually be held at the more spacious House Of Blues and feature music acts, art, and photography. The Smoking Popes, Sin Anestesia, and Littlebirds are scheduled to perform. Tickets are $18, doors open at 2:00 p.m.

Steppenwolf Theatre will be presenting How To Be A Rock Critic (Based ON The Writings Of Lester Bangs) as part of its New Lookout Series. As reported by Chicago Tribune theatre critic Kerry Reid in a preview of summer shows, there will be special guests after each performance. The show run from July 6 through July 22.