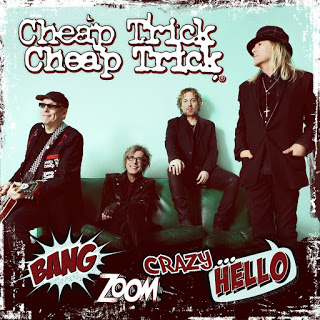 This is in no way a Best Of List, since I was only able to listen to a fraction of the music that came out last year. The albums are arranged in order of preference. I’d like to extend my gratitude to all the artists, press agents, and labels that sent CDs and downloads. I sincerely apologize that due to time constraints, I wasn’t always able to respond to the messages I received. Note: Some of these albums were actually released in 2015. So, here is the Top 20 of this year’s list. The numbers in parenthesis are the date the review was posted on Broken Hearted Toy.
(Numbers 21 through 45 were posted here yesterday.)

1. Cheap Trick - Bang, Zoom, Crazy . . . Hello Released at the same time the band was inducted into The Rock And Roll Hall Of Fame, this guitar-driven collection offered the energetic, highly melodic rock Cheap Trick is known for, along with some more experimental material. (4/11)

2. The Shelters - The Shelters The Los Angeles-based band drew inspiration from The Beatles, glam rock, and Led Zeppelin to create their own unique sound on this impressive debut. (8/30)

3. The Smithereens - ESP3PECIALLY F0R For You Two-CD set celebrated the 30th Anniversary of the band’s debut with live and acoustic tracks, demo versions, and rarities. (10/25 and 10/27)

4. Trolley - Caught In The Darkness All three members of the Milwaukee-based band can sing lead, and the power pop arrangements they create together are consistently inventive. (2/1)

6. Graham Nash - This Path Tonight His first solo album in several years found him striking a balance between exploring romantic relationships and exposing society’s ills. (5/9 and 5/10)

9. The Monkees - Good Times Micky Dolenz, Mike Nesmith, and Peter Tork made good on the inspired concept of having modern rock stars compose songs for their new album. (6/29)

10. The Pretenders - Alone Chrissie Hynde retained her status as one of rock’s premier vocalists, even if some of the material was a little soft at times. (12/31)

12. The Zombies - Still Got That Hunger Founding members Colin Blunstone and Rod Argent tapped into the American blues and soul music that has inspired them since the 1960s. (6/10)

14. The Weeklings - Studio 2 Second effort from these music veterans once again seamlessly blended original tunes with vintage rarities composed but never released by The Beatles (1/1/17)

16. The Vulgar Boatmen - You And Your Sister - Remastered 25th Anniversary Edition celebrated songs that were never hits but are still highly regarded by critics and fans. (11/10)

17. The Forty Nineteens - Rebooted Another fun collection of energetic songs with catchy melodies and the exuberant vocals of lead singer-bassist John Pozza. (5/30)

20. whitewolfsonicprincess - Shadow Of The Marigold Spinoff of Chicago theatre group Black Forest established its own identity with an enchanting mix of rock, jazz, and blues. (2/23)
Posted by Terry Flamm at 10:37 PM