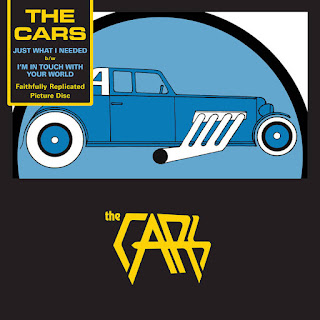 Black Friday Record Store Day takes place tomorrow, so be sure to hit your favorite record store early for one-of-a-kind vinyl treasures in seven, ten and twelve inch formats. Pretty much all genres will be available, including mainstream rock, punk, country, jazz, soul, classical, blues, heavy metal, rap, soundtracks, holiday, and techno. My personal wish list includes releases by The Bangles, The Ramones, The Monkees, The Kinks, The Rolling Stones, and The Cars.

Dave Davies from The Kinks will be bringing his first-rate backing band to The Arcada in St. Charles on April 8. I caught a Dave Davies show at Taste Of Lincoln Avenue a few years back and it was amazing. The Greg Kihn Band will be at that same venue on March 10.

The Chicago Pop Culture Show And Sale takes place tomorrow and Saturday, November 25 and 26, at the Pheasant Run Mega Center in St. Charles. There will lots of comics, toys, games, and memorabilia for holiday gift shopping, as well as special guests and cosplay. The event will also serves as a publishers and artists convention.

Tired But Not Dead Yet! After an exhausting day of shopping, Chicago area music fans can celebrate their Black Friday bargain-hunting savvy by seeing The Bad Examples at FitzGerald’s in Berwyn.

Last Friday, my wife Pam and I saw the Music On Stage production of A Christmas Story - The Musical at Cutting Hall in Palatine. It’s a fun show with talented singers and dancers, including several kids. The final shows will be staged this weekend.

I can’t remember the last time The Handcuffs had club dates two weeks in a row, but they’ll be following last Saturday’s gig at Quenchers by performing with The Demerits and The Artist Formally Known As Vince this Saturday at Township. It will be a birthday celebration for Vince. As most Handcuffs fans know, drummer Brad Elvis is also a member of The Romantics. Mike Skill from that band will be a special guest at Saturday’s show.

Two impressive local bands will join forces for a good cause when Dream Version and Bloom perform at the Protect Our Winters event being sponsored by New Belgium Brewing and Ben and Jerry’s on Wednesday, November 30 at Lincoln Hall. POW, a group working to raise awareness of the dangers of global warming, will have representatives on hand to explain their mission. There is a suggested $5.00 donation.

Also coming up at Lincoln Hall, Chicago music scene veterans The Hemmingbirds will be doing a farewell show on Tuesday, December 29. They’ll be joined by Mutts, Archie Powell And The Exports, and Jesse W. Johnson.

WXRT’s ONXRT Live From The Archives Vol. 18 will be available at Chicago area Target stores and at Target online starting next Friday, December 2. Listeners who enjoy the FM station’s frequently played roster of current artists will likely be pleased, since Vol. 18 includes efforts from Leon Bridges, Nathaniel Rateliff and The Night Sweats, The Arcs, Avett Brothers, X Ambassadors, and The Record Company. Silverspun Pickups, Andrew Bird, Twin Peaks, and Los Lobos are also featured. It’s disappointing that all the tracks were recorded within the past two years, since I’d like to see some genuine WXRT archive stuff from much earlier concerts. This edition of Live From The Archives is supported by Blue Cross Blue Shield with proceeds benefitting Horizons for Youth—Scholarship Mentoring Community and Welcoming Center—Lutheran Social Services Of Illinois.
Posted by Terry Flamm at 9:42 PM