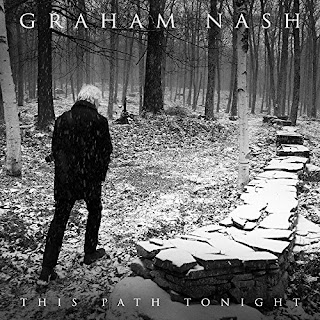 After seeing a recent Graham Nash Facebook post heralding a major announcement, I thought it might be the eBay listing that gave fans a chance to bid on being part of his May 20, 2016 BBC Radio 4: Mastertapes VIP Experience. (See last Thursday's post for details.) As it turns out, the teaser was more likely referring to This Path Tonight (Nash's first solo effort in 14 years) and his U.S. tour to support it. The 10-song CD is available for pre-order as part of an exclusive Amazon package deal that also includes a DVD that appears to have been filmed during Nash's last solo tour.

When Nash performed "Golden Days" and "Myself At Last" from This Path Tonight during a superb show at The Arcada in St. Charles last July, he promised the songs would be on an upcoming album he was working on with Shane Fontayne. The veteran musician/producer was the only other performer onstage with Nash during that tour. The 20 songs on the DVD include "Bus Stop" and "King Midas In Reverse," which Nash originally did with The Hollies; "I Used To Be A King" and "Simple Man" from his solo work; and "Marrakesh Express," "Wasted On The Way," and "Our House" from Crosby, Stills and Nash.

Nash's next solo tour starts on January 27 in Ponte Vedra, FL, and has stops in Atlanta, Nashville, Philadelphia, New York, Vienna, VA, and Austin. Chicago isn't on the list yet, but there's a gap between February 25 and May 5, so there might be additional dates. I'm not sure if he'll feel he already covered the Chicago area with his St. Charles gig last time out, but those two locations are not very close to each other. It would be nice to catch a Nash show at City Winery Chicago.

Graham Nash fans will also be grateful to hear that he contributed commentary and a chapter to the film and book I Hope You Dance. It airs as a special on the Hallmark Movies and Mysteries Channel this Thanksgiving night at 9:00 PM EST.
Posted by Terry Flamm at 6:38 PM