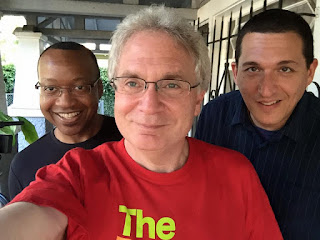 Justin Fielding in one of his many selfies. This time, he’s with Derrick Anderson (left), who has performed with The Bangles and The Smithereens, and Jim Laspesa (right), who can be seen in the Brian Wilson biopic Love And Mercy.

First, a quick reminder that this Thursday, June 25, is Global Beatles Day. The annual online event is hosted by Faith Cohen and she wants people to express their love and admiration all together now for the four lads from Liverpool. Without them, the following post would not have been possible.

Although Boston-based filmmaker Justin Fielding doesn’t plan to release his documentary The Power Pop Movie until some time in 2016, those of us who have been following his posts on Facebook already know a few essential things about it. Fielding plans to explore how a genre that places a premium on irresistible melodies and draws its main influence from classic hits of the 1960s has never been embraced by a majority of rock music fans. He has a keen knowledge of power pop’s history; the artists who helped create it and the ones who perform it now. And he’s willing to travel back and forth across the country to meet with those people.

As for the musicians who have participated in The Power Pop Movie, they include Todd Rundgren; Clem Burke from Blondie; Debbi and Vicki Petersson from The Bangles;  Mitch Easter from Let’s Active; John Wicks from The Records; Chris Collingwood and Adam Schlesinger from Fountains Of Wayne;  Lannie Flowers; Derrick Anderson; Jim Laspesa; Jody Stephens from Big Star; Ken Stringfellow from The Posies and Big Star; Dave Gregory from XTC; Ron Flynt from 20/20; Jeremy Morris; and several others. Chicago is well-represented, with Gary Klebe, Jeff Murphy, and John Murphy from Shoes; Bun E. Carlos from Cheap Trick; Brad Elvis from Screams, The Elvis Brothers, Big Hello, The Handcuffs, and The Romantics; Mimi Betinis from Pezband; Cliff Johnson from Pezband and Off Broadway; and Ted Ansani and Mike Zelenko from Material Issue.

Fielding has created a short video preview for The Power Pop Movie, and it’s likely he’ll be filming more teasers in the coming months. I proudly wore my The Power Pop Movie t-shirt to the Gold Coast Art Fair in Chicago this past Saturday. From now through July 1st, the full price of any of The Power Pop Movie t-shirts purchased from the official website will be donated to a fund established by The Wild Honey Foundation to help musician John Wicks in his recovery from pancreatic cancer.
Posted by Terry Flamm at 4:44 PM