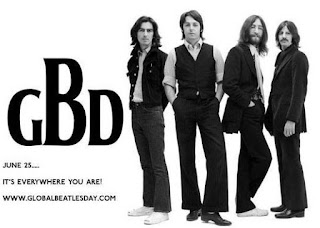 Next Thursday, June 25, is Global Beatles Day, an annual online event hosted by Faith Cohen, in which people are encouraged to reflect on the significance and all-around fabness of John, Paul, George, and Ringo.

Art for blog’s sake. People who have gone to The Gold Coast Art Fair in recent years have likely seen the eye-popping work of pointillist painter Tim McWilliams. He creates huge, colorful portraits of Marilyn Monroe, Elvis Presley, The Beatles and other celebrities. I mentioned my blog to McWilliams a few weeks back when he was one of the few brave souls who was displaying his work in the teeth of inclement weather at The Millennium Art Fair. He generously offered to give a $5.00 discount to anyone who mentions Broken Hearted Toy when they come to his booth this weekend. The Gold Coast Art Fair runs tomorrow and Sunday in Grant Park.

Go Bohemian on Randolph Street. The Dandy Warhols, whose catchy and guitar-fueled “Bohemian Like You” still reigns as the best satiric song about the indie lifestyle, will be performing at the Taste Of Randolph Street festival tomorrow night at 9:00 PM. Cult favorites Dinosaur Jr. (tonight) and the dreamy pop duo Best Coast (Sunday night) are the other headliners, and there are several indie rock acts scheduled from this evening through Sunday. Food vendors include bellyQ, City Winery, La Sardine, and Wishbone. Admission is $10.

Tickets are still available for the Squeeze November 27 and 28 acoustic shows at Park West. So you can spend part of the Thanksgiving weekend being grateful for the opportunity to see Glenn Tilbrook and Chris Difford—one of pop music’s all-time best songwriting-performing duos—in an intimate setting.

If you go to the Custer Street Fair in Evanston this Saturday and Sunday, keep an eye out for Frank Carr from the Famous In The Future comedy group. He’s always loved this event, and was even inspired by it to write a skit about an unusual vendor selling a Twilight Zone sort of figure. In addition to providing comic inspiration, the 43rd Annual Custer Street Fair will have an Eco-Village featuring solar and wind energy technology; organic/Fair Trade food; several vendors; crafts, and live entertainment. Admission is free.

The hard-edged power band Go Time! will be performing at Phyllis’ Musical Inn tomorrow night on Division in Chicago.

The Secret History Of Chicago Music casts a spotlight on the critically acclaimed power pop band Green this week. Created by the artist/journalist/performer known as Plastic Crimewave, The Secret History Of Chicago Music exists in comic form in the Chicago Reader, and there’s a radio version that can be heard on WGN each Saturday morning as part of Mike Stephen’s Outside The Loop program. Mr. Crimewave concentrates on “pivotal Chicago musicians that somehow have not gotten their just dues.” I have three different Hollies portraits done by Plastic Crimewave from the times he made in-store appearances at the Reckless Records store on Milwaukee Avenue as part of the annual Record Store Day celebration. (For $5, he would draw any band you wanted.)

At the risk of sticking “Chelsea Dagger” in your head (as if it wasn’t already there these past few days if you live Chicago) I’ll pass along the news that The Fratellis have a gig coming up on September 24 at The Vic. Chances are, fans of the 2015 NHL Champion Chicago Blackhawks will still be in the mood to hear “Chelsea Dagger,” which has been the team’s unofficial theme song for years now.

U2 arrives in Chicago next Wednesday, June 24 for the first of five gigs (also June 25, 28, 29 and July 2) at the United Center, as part of its iNNOCENCE + eXPERIENCE tour. The shows will no doubt prove U2 is still one of rock’s most potent and emotionally relevant acts. And yes, Songs Of Innocence was a good album, no matter what you may have seen on social media.

With all the major events going on around Chicago this weekend, you might still want to find some time to hang out with a time traveler. As reported in this past Wednesday’s edition of Redeye, The Right Brain Project theatre ensemble has created a follow-up its 2013 Doctor Who-inspired show The Timey-Wimey Fantastic Brilliant Extravaganza (Geronimo!). The new production Who Too runs Friday, Saturday, and Sunday at The Right Brain Project, 4001 N. Ravenswood .

I can’t say that I’m a regular Lucky Brand customer, but as I passed by their location on the ground floor of the Shops At North Bridge mall on Michigan Avenue, I spotted several Rolling Stones t-shirts  that would be perfect for fans going to see The Stones next Tuesday, June 23, at this year’s SummerFest in Milwaukee.

Other acts scheduled for SummerFest include Stevie Wonder, Neil Young And The Promise Of The Real, Grace Potter, Jane’s Addiction, The Kooks, Pat Benatar And Neil Giraldo, The New Pornographers, The Romantics, Sloan, and The Wind.

Finally, my wife Pam is one of the finalists to be the first woman featured on a $20 bill. Even if she doesn’t nab that honor, be sure to remember that this Sunday is officially Pam Appreciation Day.
Posted by Terry Flamm at 11:06 PM