Please Sir I Want Some More! 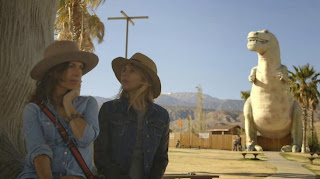 It’s okay. He only wants to request “Eternal Flame.” Photo from the Susanna Hoffs Facebook page.

I posted a mini Slumgullion earlier today just in case I had to work late again tonight. But I got out at a decent hour, so here are some more nuggets from the entertainment world. It’s been a busy week, which resulted in my not posting here Monday through Wednesday. But at least I submitted CD reviews to the Illinois Entertainer for Richard X. Heyman, Las Kellies, Clara May, and Ryan Powers And The Secret Weapons. I liked all of them. Hopefully, they’ll be in the October or November issue.

You’re an introverted man, Charlie Brown. RedEye, a free daily newspaper in Chicago, has a regular feature that spotlights fun and unusual sites on Tumblr. This Charming Charlie sets Morrissey-penned lyrics from his solo music and with The Smiths to Peanuts comic strips. Somehow, the combined angst usually is pretty funny.

Tatoo You. Verbal Tonic, an organization dedicated to giving urban individuals an opportunity to creatively express themselves, is staging an evening of spoken word, poetry, music and art at Mars Hill Tatooo from 7:30 to 10:30 PM on Friday, October 11th. Ebonee Oliver will be the featured artist, and guests can participate in an open mic. Mars Hill Tatoo is located at 6956 N. Clark Street.

Susanna Hoffs got some help from actress Rosanna Arquette on her new video for “Raining.”  It’s an emotional song from Hoffs’ Someday solo release, matched to some emotional footage, but it does look like the two women had fun filming it. In other Hoffs news, her Facebook profile shows the cover for Under The Covers Vol. 3, her latest collection of copy songs with Matthew Sweet. This time out, the duo is focusing on the 1980s.

The Jokes4Miles crew, led by comedian/writer Len Austrevich, will be offering a sneak preview of the sketches they’ve been working on prior to the official uploading. The event takes place October 12th at J4M HQ at 3660 W. Irving Park Road in Chicago, and is a collaboration with friends and filmmakers from DePaul, Tribeca Flashpoint and others. Admission is free, BYOB, and there will be free snacks and non-alcoholic beverages. This will also be an opportunity to find out more about Comedy Well Done, a new channel offering animation, short clips, and vintage footage.

We like things broken around here. James Moeller, a performer with Black Forest Theater, as well as a musician with whitewolfsonicprincess and The Telepaths, has yet another iron in the fire with his new Broken TV project. He has an EP available for pay what you want download on Bandcamp.
Posted by Terry Flamm at 11:53 PM