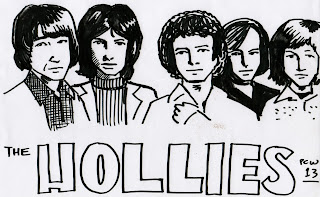 After waiting outside Laurie’s Planet Of Sound from around 9:00 to 10:00AM on Record Store Day, I was waved inside by the friendly doorman and went straight to the counter with my wish list. The popular Lincoln Avenue record and pop culture store had already sold out of many of the special day’s limited edition vinyl releases, but fortunately I was able still able to nab the four-song EP Revolution Of The Mind by The dB’s; The Three O’Clock's Live At The Old Waldorf; and The Animals’ The Animals Is Here. The staff was friendly and efficient, and I was quickly off to other RSD adventures.

Next, I dropped by the Reckless Record Store on Milwaukee Avenue, where artist Steve “Plastic Crimewave” Krakow was once again doing quick sketches of any band a customer could think of for a mere $5. Krakow’s Secret History Of Chicago Rock comic runs in the Chicago Reader, and he also publishes his own eclectic ‘zine, Galactic Zoo, which is filled with his distinctive rock and roll artwork. This was the third year I requested a Hollies portrait by Krakow; I’ve been moving through their career from the earliest days, on to their psychedelic period, and now had brought in a Terry Sylvester era magazine cover as a model. Krakow sort of knows me by now and we talked about music as he brought the band to life via his black marker and sheet a white paper.

Later that afternoon, I headed back to Laurie’s Planet Of Sound, where Dolly Varden was doing an in-store performance to promote its latest CD, For A While. The critically-acclaimed alt rock/C&W band, led by the husband and wife team of singer-guitarist Steve Dawson and singer-guitarist Diane Christensian, performed at the back of the store while customers packed the aisles. Dawson underscored the picturesque lyrics from his autobiographical songs through heartfelt singing, and combined with Christensen on some carefully woven harmonies.
Posted by Terry Flamm at 11:11 PM