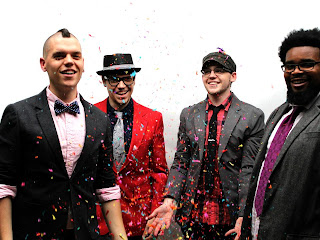 This is the final day for International Pop Overthrow-Chicago 2013. Tonight’s showcase at the Red Line Tap offers prime examples of Chicago style power pop, along with an out-of-state visitor. If you haven’t checked the IPO-Chicago online schedule in awhile, you should be aware that some changes have taken place. For much more detailed info than I’m providing here at the last minute, along with  the full schedule and links to all the artists, see the IPO website.

The Redfords started as a studio band in 2007, and their indie pop songs have been played on WXRT and other local stations.

92 Degrees was one of three Chicago bands that participated in the very first International Pop Overthrow in Los Angeles back in 1998 (The Idea and The Critics were the other two) and they’ve been an integral part of IPO- Chicago right from the start. The trio hasn’t released anything in awhile, but the classic power pop songs from their vinyl EP, Money Makes The World Go ‘Round and self-titled CD are as vibrant as ever. They’ve taken over for The Valley Downs on tonight’s schedule (bassist-vocalist Make Galassini is in both bands).

South Carolina-based A Fragile Tomorrow’s latest effort, Be Nice Be Careful, which was produced by Mitch Easter of Let’s Active, is now available. The quartet, which has toured in support of The Bangles and R.E.M., will likely be playing songs from it during its show tonight.

The Queue seems like a perfect name for a group heavily influenced by the original British Invasion, and when I saw these guys a few years back, they certainly did their moniker proud.

Mike Vanderbilt performed a solo IPO-Chicago gig a few nights back, and tonight he returns with The Romeros. I really enjoyed this the last time I saw them at IPO-Chicago, and since its future is in doubt, tonight would be a great time to catch them.

The Van Buren Boys promise their Chicago rock ‘n’ roll/power pop will be “fun with a capital F.”
Posted by Terry Flamm at 12:13 PM