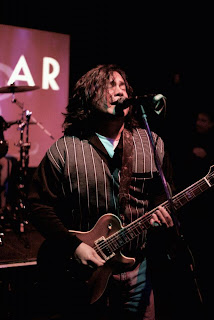 Photo of Jimmy Rane from The Viaducts Facebook page.

International Pop Overthrow continues its 2013 Chicago visit, and Thursday night provides yet another opportunity to check out six acts for just $10. The full schedule, with links to all the artists, can be found at the IPO website.

Owen Stevenson is also a singer-songwriter, and has an extensive background in theatre as well as performing as a solo artist on cruise ships. His music has been inspired by Dave Matthews and John Mayer.

The seven-piece band The Red Wigglers has been keeping busy as of late, sharing bills with other groups on the Chicago scene. The lineup includes a trumpet player and a trombone player, and lead vocalist Megan Tormey is always ready add more cowbell.

Vocalist-bassist Kevin Gibson and guitarist-vocalist Butch Bays, AKA The Uncommon Houseflies, are based in Louisville, KY, and list The Hoodoo Gurus, Material Issue, and The Smithereens among their numerous influences. That last bit of info alone is enough to make me want to see them.

I caught a live performance by The Viaducts a while back when they were on a triple bill with Magatha Trysty and The Right Tidys. Lead vocalist-guitarist Jimmy Rane draws from Buddy Holly on catchy songs like “Your Smiling Face (Walkin’ By In Blue Jeans),” while “Drive-Thru Girl” feels a bit more like The Ramones. Rane’s guitar playing is especially impressive live. The band has a full-length CD out titled, Mission To Destroy.

The power pop continues with Rollo Time, whose 2010 CD, Victims Of The Crown is filled with catchy tunes like “’Til It All Comes Down.” Singer-songwriter Jon Raleigh was formerly with The Times Beings.
Posted by Terry Flamm at 10:59 PM