Dolly Varden - The Art Of Songwriting - Part One 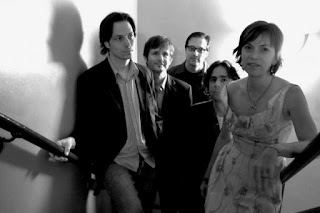 Note: This article originally appeared in the Illinois Entertainer. The band, which was also recently profiled in the Chicago Tribune, Chicago Sun-Times, and Time Out Chicago,  just returned from a short tour in the UK.

Dolly Varden has been releasing CD’s since its critically-acclaimed debut, Mouthful Of Lies, came out in 1995, but describing the Chicago-based quintet’s music can still be a bit tricky. Singer-guitarist Steve Dawson crisscrosses genres as Dolly Varden’s main songwriter, like an artist choosing colors from a palette. There are swatches of indie rock, folk, and country. Dawson’s wife, singer-keyboards player Diane Christiansen, used to do more songwriting, but has recently become heavily involved with her career as an artist. All but one of the Dolly Varden CD covers have featured her intriguing artwork. The couple has been working with the same musicians -- guitarist-lap steel player-vocalist Mark Balletto, bassist-vocalist Mike Bradburn, and drummer-piano player-vocalist Matt Thobe -- throughout Dolly Varden’s entire history. For A While, their first effort in seven years, adds even more nuances to the band’s eclectic approach.

“This was an attempt to make more of a rock record,” Dawson explained during a recent interview at the home he shares with Christiansen. “That was the plan. I don’t know if we carried it out because I think the songs I like best on For A While are the ones that aren’t big rock songs.”

Some of the engaging introspective songs are the title track, which features Christiansen on lead vocal; Dawson’s folksy and autobiographical “Saskatchewan To Chicago,” and the delicate “Favorite Friend.” But Dolly Varden also does a fine job of executing the big rock songs. “Done (Done)” has a driving beat, “Walking The Chalkline Again” mixes gorgeous harmonies and energetic guitar playing, and “Thank You” gives the CD a rollicking finale. The catchy “Why Why Why” would have fit in well on Fleetwood Mac’s Rumours LP.

“I always thought of that song sounding like Van Morrison,” Dawson said of “Why Why Why.” “But I appreciate the Fleetwood Mac [comparison] very much.” Dolly Varden did a short set of Buckingham-Nicks era Fleetwood Mac songs as part of a tribute band weekend at the Martyrs’ club in Chicago this past Halloween. “I always liked them, but now I respect them more, after having sort of looked under the hood of those songs.”

As a songwriter, Dawson draws inspiration from various sources, including the early 1970’s music of Neil Young, Gram Parsons, and Linda Ronstadt, as well as The Beatles. He agreed with the image of him being like an artist working from a palette.

“I also hear the comment, ‘Wow, the record is really varied,’” he noted. “Maybe that’s because the template for me was those middle-period Beatles records where every song was a world unto itself.”
Dawson added that his best songs seem to spring from nowhere, as opposed to ones that he really has to labor over. Having read interviews with songwriters, and books by Keith Richards and Neil Young, he’s discovered that other artists also feel the creative process works best when it flows naturally. Dawson teaches Fundamental Songwriting and Continuing Songwriting classes at The Old Town School Of Folk Music, but feels he can only present the mechanics, along with a forum for sharing ideas.

“I  can’t teach you how to write a song,” he maintained. “You have to learn by doing it.” He gives his more advanced students challenging assignments like pretending they’re trying to write a hit single for Country & Western legend, Patsy Cline. “They bring it in and play it for everybody, and we talk about what may or may not be working.”
Posted by Terry Flamm at 9:05 PM