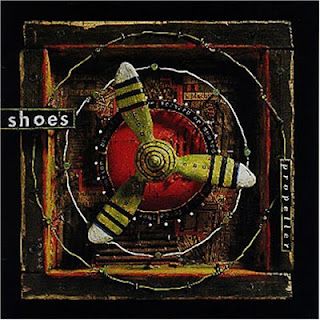 This is the second of three installments of a feature story on Shoes that I wrote for the Illinois Entertainer.

“We were at the forefront of DIY,” Klebe recalled. “Some people say we invented it.” He added that he and the Murphy brothers were reluctant to anoint themselves as the fathers of DIY since others artists like Todd Rundgren had also recorded in home studios by that time. Still, Rundgren had a major label to release his finished products.

Even with all their experience, it had to be daunting for Shoes to return to the recording process, considering their previous CD, Propeller, came out in 1994.

“It seemed surreal to be doing it again,” Klebe acknowledged. “As things went along, we realized it was more than fascination. There was growth down the road and we really had something.”

John Richardson, a drummer who had worked with Shoes on previous occasions (the band’s original drummer, Skip Meyer, split quite a while back) was brought in on the recording sessions. The harmony vocals and seamless playing on Ignition stem from the camaraderie that has served these three musicians so well on previous albums.

“We’re a friendly band,” John Murphy explained. “Nobody wants to step on anybody’s toes. On the other hand, I want to hear the other members’ ideas. In most cases, it works. They’re not trying to do a 180º on it.”

“It’s like passing your baby around at a party,” Klebe said of the band’s collaborative approach. “There’s nothing more important than making sure the baby doesn’t fall.”

“We have to be careful in suggesting changes,” Jeff Murphy agreed. “We’re very conscious of the writer’s intent. The reason you’re in a band is to get that input. There’s no one I trust more than the other two guys.”

One of the songs on Ignition did change quite a bit during the recording session, though. Jeff Murphy’s “Out Of Round,” a poignant look at the death of a spouse, started out as a ballad, but wound up with a driving pop arrangement similar to “Your Imagination” from the band’s 1981 Tongue Twister album. The idea for the turnaround came from John Murphy and Klebe, who were relieved when Jeff Murphy fully embraced it.

Throughout Ignition, the band members take turns singing lead, and all three contribute backup vocals. The mid-tempo “Diminishing Returns,” one of several songs on the CD that examines the unraveling of a relationship, and the lilting “Wrong Idea” in particular, have elaborate call and response vocals that create a lush sound.

“There’s a lot of interplay on vocals and music,” Jeff Murphy explained. “And I don’t think we had to strain to do it. It comes from being together for so long.”

“Some of the back and forth vocals are the most spontaneous thing we do,” Klebe added.

“It’s a mutation process that becomes better after we all come together,” John Murphy said of the band’s intricate and occasionally Queen like vocals. “Every song, we ask how much do we want to do, because by God, we can do it.”

Coming next:: Words of love and relationships unraveling.
Posted by Terry Flamm at 5:05 PM