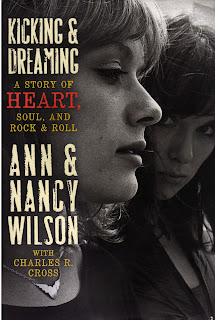 When Heart released Strange Euphoria earlier this year, it seemed more like a gift to the group’s longtime fans than a typical greatest hits package. The box set struck a balance between popular songs and previously unreleased material that provided additional insight about Ann and Nancy Wilson. Working with journalist Charles R. Cross, the sisters take a similar approach in their recently released book, Kicking And Dreaming - A Story Of Heart, Soul, And Rock And Roll. They delve into the sex and drugs you’d expect in a bio of one of rock’s best known bands, but concentrate more on family ties, troubled relationships, and honest reflections on over 35 years in the limelight.

Using a format that feels like an in-print documentary, the 272-page book shifts point of view between the two Wilsons, with occasional posts from people closely involved with the band. The prologue offers a valuable perspective on how quickly things can change in the entertainment field. Fired from a seedy rock club in Canada shortly after the release of Dreamboat Annie for not playing enough cover songs, the band is rescued from despair when the promotions manager at their label calls with the news that they’ve been booked to open for Rod Stewart.

From there, Kicking & Dreaming travels back to the courtship of Ann and Nancy’s parents, and then traces the family’s history through the time when each sister eventually moves out. Less devoted fans might find these earlier chapters a bit tedious, but the intent is show how much Ann and Nancy’s creative endeavors were shaped by events in their childhood. As an overweight kid shunned by most of her classmates, Ann would form a deep bond with Nancy. Together, they would discover The Beatles via The Ed Sullivan Show and begin playing instruments and writing their own songs. While other girls their age dreamed of marrying a Beatle, Ann and Nancy longed to be just like the four lads.

“We had no idea that being females in rock ‘n’ roll would be an issue we would face at every turn,” Nancy remarks in the Prologue. Along with the close-knit relationship between the Wilson sisters, the other running theme in Kicking And Dreaming is the rampant sexism that has dogged them from Heart’s early years. Even their record label ran an ad insinuating that Ann and Nancy were incestuous lovers. Ann suspected critics would judge a concert based on her weight, while other musicians - - some well-known - - were either dismissive or sexually aggressive. “Barracuda” was a reaction to an encounter with a lewd radio promotions guy. It’s hard to blame the Wilson sisters for wanting to settle the score in their book. And since the problem has hardly gone away, Kicking And Dreaming should encourage younger female musicians to stand their ground.

Ann and Nancy fared better with Mick Jagger (who confided he was worried Keith Richards wouldn’t show up for the Rolling Stones’ performance), Elton John, and Queen, whom Ann describes as “the ultimate English gentlemen.” Bono from U2 and John Paul Jones from Led Zeppelin (who produced the live CD, The Road Home for Heart) are also shown in a positive light. It’s interesting to learn how much Heart influenced the Seattle bands who came after them, like Pearl Jam and Alice In Chains. On the flip side, there’s a touching anecdote about Nancy finally getting to meet her hero Joni Mitchell, and noting, “I wanted nothing more in the world than to listen to her talk.”

Kicking And Dreaming is fascinating for its behind-the-scenes look at various turning points in Heart’s career. The initial success of Dreamboat Annie, the legal troubles with their first record label, and a dramatic comeback in the mid-1980s that saved the band from imploding, but at the cost of creative freedom. The book also covers the Wilsons’ potentially band-ending break with the Fisher brothers. Guitarist Roger comes across as a talented and amiable musician whose hippie frame of mind led to affairs that would doom his relationship with Nancy. Michael, who represented the band, was caught cheating on Ann. He’s depicted as a control freak, but one whose marketing strategies catapulted Heart into the big time.

Kicking And Dreaming ends with Ann wistfully reflecting on the 27 musicians who performed with her and Nancy over the years. If Heart is inducted into the Rock And Roll Hall Of Fame this year, it will be interesting to see how many of those band members get an invitation to the ceremony.
Posted by Terry Flamm at 10:43 PM