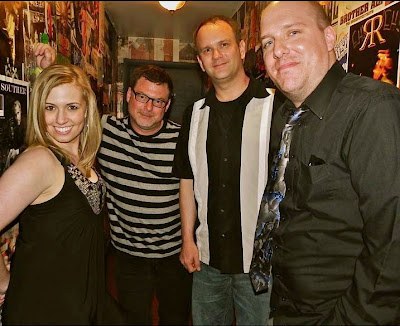 Magatha Trysty’s new CD single “Brighter” is a catchy mid-tempo song about a guy trying to prevent anyone from finding out his girlfriend has split, while lying to himself about being better off without her. Singer-guitarist Chris Bevard adroitly handles the ironic lyrics, and harmonizes with singer-piano player Catherine Louise. The cohesive blend of garage rock and power pop, along with the coed dynamic, is similar to the approach the Chicago-based quartet used on its previous three-song, self-titled EP. (See my review in Archives, under May 19th, 2010.)

Magatha Trysty has been distributing free copies of “Brighter” in record stores to promote upcoming gigs, like the one tomorrow night at The Abbey Pub . That’s where they first came to my attention, performing as part of the 2010 International Pop Overthrow. They’ll be opening for Em & Them and Bear Lake, and also have a show coming up at The Elbo Room on July 27th.