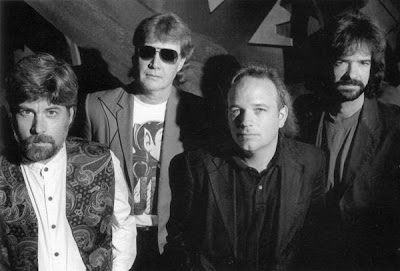 Photo of The Spongetones taken from their MySpace page.

Here's part 2 of my 2009 look at the Yuletunes various artists compilation on Black Vinyl Records.

By the way, The Spongetones will be playing at The Double Door Inn in Charlotte, North Carolina on New Year's Eve. A special guest is promised for the show.

The four songs on today’s post illustrate how lead vocalist-guitarist Jeff Murphy of The Shoes couldn’t have anticipated the mixed bag he’d wind up with when he bravely asked a variety of musical artists to participate on his Christmas compilation, Yuletunes.

The Cavedogs were a Boston band that according to Wikipedia, often mixed comedy with its catchy pop music. That’s certainly the case with “3 Wise Men And A Baby (Xmas Song),” a funny and ambitious epic that begins with a sound bite of Burl Ives’ talking snowman from the Rudolph The Red-Nosed Reindeer animated special. About halfway through, the guitar-driven song abruptly shifts into a lounge act reminiscent of the bit Bill Murray used to do on Saturday Night Live. The rollicking finale finds the band singing “alleluia” against a backdrop of George Bailey scolding his kids in It’s A Wonderful Life.

The Spongetones take us to a much more tranquil place with their acoustic-based, innocent fantasy “Christmasland.” While they had shown an ability to mimic The Beatles on their own albums, here The Spongetones craft an old-fashioned Christmas tune with a delicate melody and intricately layered vocals.

Listening to “A God Of My Own” by the Chicago trio 92 Degrees requires some thought since it’s a complex look at religious beliefs at what is undoubtedly the most commercial time of the year. The lyrics, “You go your way and have a Merry Christmas/I’ll go my way and have a Merry Christmas,” express a tolerant attitude that’s sometimes lacking when it comes to matters of faith. With its ringing guitars, the mid-tempo “A God Of My Own” has the British Invasion influence the band tapped into on its 1990 EP, Money Makes The World Go ‘Round. 92 Degrees would go on to record a first-rate full length debut a few years later, and still makes the occasional live appearance to this day.

Thanks for sharing. This artist influenced me a lot, a reason why I started to play instruments. I am into playing the piano now, and I am still learning but I'm having a blast. Thanks again!