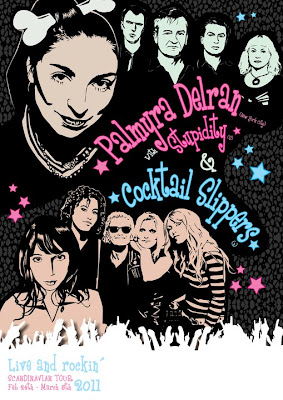 I’d like to wish everyone a safe, entertaining, and Happy New Year’s Eve.

Commercial-Free Party Zone. WXRT is aiming to be part of a lot of people’s New Year’s Eve festivities by offering five hours of nonstop party music from 9:00 PM to 2:00 AM. That means no commercial interruptions, which would be great since radio commercials seem to be reaching an all-time nadir for creativity these days. People out of the Chicago area can stream WXRT via its website.

Have Yourself A Mary-Arrchie New Year's. The Mary-Arrchie Theatre’s annual New Years Eve party should attract a fair amount of thespians and other creative types. Kicking off at 9:00 PM, this BYOB bash is free and could involve dancing to music on the radio. Bring your own party hats and noisemakers. Trying to squeeze in an audition for the current season would probably be a social faux pas, but it never hurts to network. The Mary-Arrchie Theatre is located at 735 W. Sheridan Road. Check out their Facebook page for details.

Screamin' In The New Year. Screamin’ Rachael, a longtime player on the Chicago scene who was dubbed The Queen of House Music by Billboard magazine, will be hosting the TRAX VIP New Year’s Eve party tonight at Excalibur. Starting at 7:00 PM, at 632 N. Dearborn.

“I Wuv You, I Wuv You,” Said The Little Blue Man. Enclave, the trendy Chicago club, is promising a surreal 2010-ending experience with its Pandora New Years Eve event. The idea is to create an Avatar ambience within the 15,000 square foot venue, with friendly Na’vi guides, lush plants and flowers, and a whole lot of blue lighting. Maybe they’ll even play that 1950s hit single, “Little Blue Man.” Probably not. Tickets include a 9:00 PM to 1:30 AM super premium open bar, champagne all night and an appetizer buffet.

Ol’ McDonald Had A (Expletive Deleted) Farm. Looks like some children found inappropriate tunes under the Christmas tree this year. Wal-Mart is recalling copies of the Kids Favorites CD after customers complained of hearing cuss words amidst the happy sing-alongs.

Back In Black (With Sugar). Sunday Morning Coffee With Jeff, an Internet show that brews up an entertaining blend of original comedy bits, vintage TV and movie clips, and the host’s sly observations, returns this Sunday, January 2nd for its third season. My wife Pam and I created 20 episodes of Manchester Gallery for Jeff last year, and now that the Gallery is closed we’ve been exploring new concepts. We should have one or two of our bits on Jeff’s show this Sunday.

Sonic Princess And The Pretty Mama Sisters. Indie/avant garde rockers WhiteWolfSonicPrincess will be part of a five band showcase at The Elbo Room on Lincoln Ave. next Saturday, January 8th. Other acts on the bill include August Son, St. Bagu. Moirai Band, and Sexy Ester and the Pretty Mama Sisters.

And They Couldn’t Prevent Jacks From Being Happy. Don’t forget Cliff Johnson & The Happy Jacks, with guest acts Thin Grin and Shake Hands With Danger will be performing at The Abbey Pub tomorrow (January 1st) night. Doors open at 8:00 PM. Tickets are $12.

The School Of Rock The Rock and Roll Hall of Fame is looking for donations to help fund its educational and community programs.

Friggin Stupid Slippers. Former Friggs member Palmyra Delran has a short tour of Norway and Sweden coming up toward the end of February. The bands Stupidity and Cocktail Slippers are also on the bill. All three acts have the Little Steven seal of approval.

Paste This In Your Calendar. Paste, one of the better rock magazines in the U.S., is promising some exciting news for its subscribers and fans in early 2011.