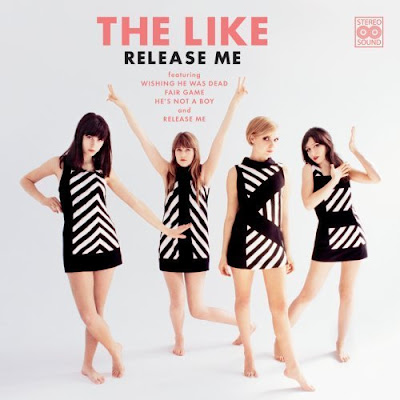 The latest issue of Time Out Chicago magazine has a feature on The Like, a four-woman band that draws its inspiration from the original British Invasion. They’re in Chicago tomorrow night, as part of a triple bill that includes The Static Jacks and headliners The Futureheads at Lincoln Hall. I can’t say that I had heard of The Like before, although they’ve been around a few years. The article made them sound pretty interesting, and the catchy and clever songs on their MySpace page have me eager to buy their latest CD, Release Me, which comes out next Tuesday.

Happy Birthday wishes go out today to singer-guitarist Chloe F. Orwell, who along with her husband, drummer Brad Elvis, has fronted Big Hello, as well as their current band, The Handcuffs. Orwell is a charismatic performer who never shies away from expressing her opinions. The Handcuffs are currently working on the their third CD, and have just announced their summer schedule, which includes outdoor gigs at Millennium Park, Taste Of Lincoln Avenue, and North Halsted Street Market Days.

The Old Town Art Fair, which takes place this Saturday and Sunday, is always worth checking out (along with its sibling event, The Wells Street Art Fair) and this year it will be even more fun thanks to The Bon Mots. The highly melodic Chicago power pop band will be performing at the corner of Orleans and Wisconsin Streets at 3:30 PM.

Congratulations to Braam, the Chicago-based rock band comprised of 17 brothers. Actually, three brothers and a non-related drummer. Their “Burlington Northern” has snagged World Music and Independent Film Festival nominations in the Music Videos category for Best Cinematography and Best Director (Jerry Vasilatos). The band is also asking its fans to vote for “Burlington Northern” in the WMIFF People’s Choice category.

I’ve complained here before about the lack of Hollies souvenirs being offered to fans, but there are now some pretty cool things for sale on the band’s official website. In addition to the various tour books which have been available for quite a while, there’s a new book, titled Through The Ages. It features photographs of The Hollies from drummer Bobby Elliot’s personal collection, and many of them are previously unpublished. Fans will also find shirts and a baseball style cap bearing the Hollies logo for sale. I’ve already added some of these items to my birthday wish list, but I’d still like to see The Hollies create their own Rock And Roll Hall Of Fame t shirt.

Crystal’s Blue Line Persuasion. Now that American Idol runner-up Crystal Bowersox has told Mike Thomas at the Sun-Times that she’s considering a “guerrilla subway tour” in Chicago, I wonder if we’ll start seeing a number of pretenders donning blond dreadlock wigs, hoping to cash in on her idea. According to Bowersox, she used to earn enough money to eat and pay rent by performing at L stops in Chicago back in the days before she became famous.

Glenn Tilbrook has just posted on his Facebook page that Squeeze will be releasing a CD in August. The band will be part of a dream double bill with Cheap Trick at Ravinia in Illinois on July 10th.

It was great to read in the news today that Natasha McShane, the Irish exchange student who was severely injured by a man wielding a baseball bat this past April in Chicago, is starting to walk, eat, and talk again. Her recovery is taking time, but her parents are encouraged. There will be two benefits for McShane in the Chicago area this Sunday, June 13th. Gaelic Park, in suburban Oak Forest, has a full line-up of entertainment scheduled for its Tara Room and Carraig Pub. The Orland Park-based band Bohola kicks things off at 3:00PM, and the live music continues until 7:45PM. Other acts include the Katie Sullivan Band, Gavin Coyle, and Three Men In Kilts. The performances at the Irish American Heritage Center, on the city’s north side, will start at 1:00PM with the Pauline Conneely Ceili Band in the Erin Ballroom and the Johnny Gleason Duo in Fifth Province. The fundraiser concludes with the Joe McShane Band and Seamus Kennedy, who start their shows at 8:00. Other acts include students from the Academy of Irish Music featuring Trinity Irish Dance, Baal Tinne, who will also feature Trinity Irish Dance, and Avondale Ramblers. The full schedule for both of these fundraisers can be seen at each location’s website. Here’s wishing McShane a full recovery.

Rock N Load is reporting on Facebook that The Go-Go’s have canceled their Happily Ever After farewell tour, which was scheduled to start at Lilith Fair in San Diego, on July 27th. Guitarist-vocalist Jane Wiedlin injured her knee while hiking, and will need surgery to repair it. Her recovery is expected to take up to a year. No word as to whether the band will try another farewell tour at that time. Wiedlin has posted a message on her Facebook page that she’s currently writing and recording songs.

Index: The Go-Go's, The Handcuffs, The Hollies