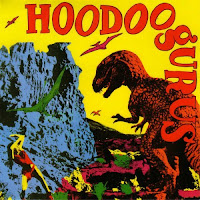 Australia’s The Hoodoo Gurus are not only one of the most talented garage bands around, they’re also one of the spookiest. This was evident on their rollicking 1984 debut, Stoneage Romeos, which comes across as the perfect soundtrack to a Halloween party. “Leilani” is about a tropical human sacrifice, “In The Echo Chamber” is based on a torture scene from Get Smart, and “Death Ship” describes a ghostly crew that lures other sailors to their doom. “Dig It Up” features a galloping backbeat, twanging guitars that raise the spirit of The Cramps, and opens with the line, “My girlfriend lives in the ground.” Head Guru Dave Faulkner sings of placing flowers on a grave each day and laments, “I want her back/Because I look so bad, so bad in black/Like a maniac.” Later, he concludes, “You can’t bury love, you gotta dig it up.” The band breaks into some wild jamming, along with Faulkner’s ear-piercing screams. The cause of the beloved’s death is never revealed, because it would be too painful. “My friends, you ask me why she’s six feet down/I can’t tell you why ‘cos if I even try/I’d fall flat down on my face.” Faulkner’s promise to paint his girlfriend’s room pink and blue doesn’t seem like much of an incentive to return from the dead, but then “Dig It Up,” like the best of The Hoodoo Gurus’ energetic garage rock, skillfully balances the macabre with the silly.